You may recall that last year, i wrote up our first costume replica project for the Museum of Science Fiction, the flight attendant costume from 2001: A Space Odyssey. Today i've got the next project installment to share, the Neo costume from 1999's The Matrix.

This one came about because a donor gave the museum a pair of Airwalk buckle boots which were purportedly used in the making of the film, and they wanted to create an exhibit around those boots, a display of the full costume look for the character of Neo (played by Keanu Reeves). Here's what we did:

First up, I created a Pinterest board for research images for the project, and rising second year grad student Erin Torkelson began to add specific screencaps to it, on top of all the extant imagery i found for the costume. Erin also worked with the folks at the Museum to set up a conference call with the film's costume designer, Kym Barrett, who generously took the time to talk with us about the original costumes. She gave us a lot of wonderful information about her concept for Neo's clothing, and also told us some fun facts, like that there were over 20 versions of the iconic Neo coat, made up in many different types of materials so that they would behave differently in various conditions--linen ones, wool ones, screenprinted ones, coats designed to be shot underwater, etc.

So ironically, our conundrum was, how do you make a replica of a costume for which there is no single costume to copy, something for which there were numerous iterations, all both identical and yet very different, and for which the icon itself doesn't exist other than as an impression in the mind of the viewer? (Isn't that so perfect, given the film in question?) So as we determined in our conversation with Kym, we were making a representation of the icon, a costume which anyone who walked into a room with it would know from 50' away: "That's the Neo costume from The Matrix."

We worked with a friend of mine, Katie Straker, who is an employee of Mood Fabrics, to swatch wools for the coat, and our assistant costume director, Jenn Guadagno, drafted the pattern for it following traditional tailoring methods. She then supervised its construction with a team of our graduate and undergraduate students serving as her first-hands and stitchers: 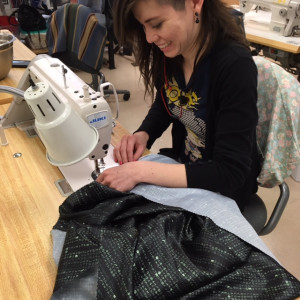 There's one close-up shot in the film where we thought we caught a glimpse of the digital drift imagery on the lining of the coat, and sure enough, when we asked Kym Barrett about it, she confirmed that that was true.

So using a still from the film, MFA '16 grad Erin Abbenante did the digital drift textile design you see here, which we had printed at Spoonflower. 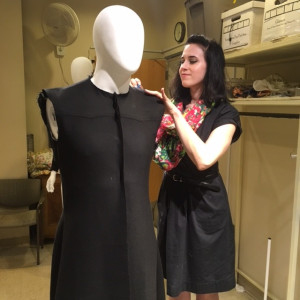 Rising third year grad Emily Plonski adjusts the capelet at the shoulder seam before the sleeves go in. 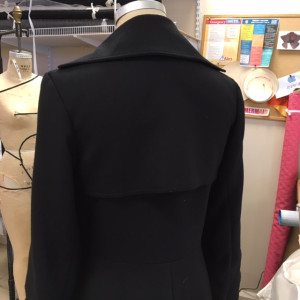 Look how beautiful that turned out! 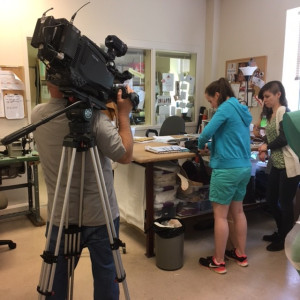 Local news WRAL did a feature on us! Here they're filming rising third-year Max Hilsabeck working on the gun holsters, which were patterned and overseen by rising second-year Erin Torkelson. 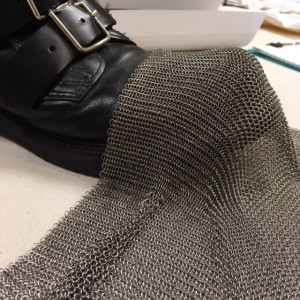 The donated boots were definitely not the ones worn by Keanu Reeves in the film--they were likely a stuntman or distance double or similar, because among other things they did not feature the iconic chainmail toecaps of Neo's boots, so famous from the giant closeup shot in the film. MOSF wanted theirs to have that aesthetic element though, so above you see a sheet of chainmail and the boot in question. 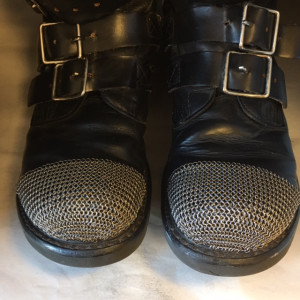 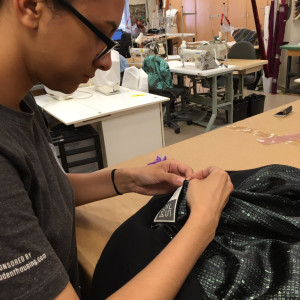 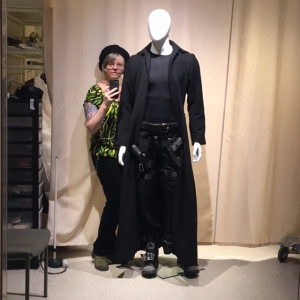 Obligatory mirror selfie with Neo in the PlayMakers Repertory Company fitting room. When the WRAL camera crew looked at him and said "It's like he looks MORE real than the one in the movie," I knew we'd succeeded.
You can see this costume debut on display at the upcoming MOSF extravaganza, Escape Velocity, coming to DC In July!
Tags: boots, mosf, tailoring
Subscribe